Don't be gram-wise, and gear foolish!

While we at NRBC are all for rationally lightening the load to better one's bike-packing enjoyment, we do feel this can be carried too far.

Signs that you may have carried the lightening to excessive extremes include rationalizations along the lines of:

The above examples are not self-supported touring efforts.

The chaps in England who wrote about "ultralight bicycle camping" way back in 1906 used 12 LB Kits, as noted in Horace Kephart's book Camping and Woodcraft. These keen cyclists were masters of the Utralight Touring, carrying a minimalist tent, sleeping and cooking gear in a small lightweight bundle that was easily packed and carried across great distances with reasonable comfort.

Now, Credit card touring is nothing new. It was done before credit cards were invented, by Thomas Stevens. But proper ultra-light touring, to our minds, is exemplified by leaving the salad fork at home, and packing the tube tent. 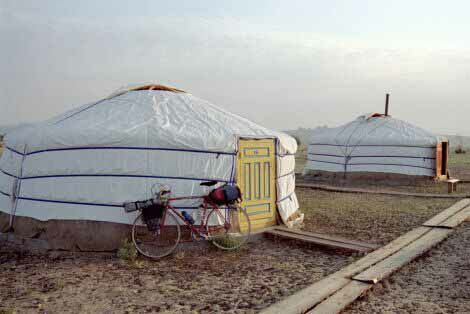 Igor finds bike parking beside a Yurt in Mongolia.
One of many outstanding photos on Igor's site.

Our international cycle-touring, and ultra-light extremist, friend Igor, in the Republic of Slovenia advocates no stove and no cooking/eating utensils. He freely admits the weight savings decreases off-bike comfort and have no proven benefits, but his obsession is interesting. We rather like our way of doing things, and we try to make up for carrying less utensils by packing an extra fifth of brandy, a jar of olive tapenade and an assortment of fine cheeses.

Yet, Igor's slides & photos are awesome!

Email ThisBlogThis!Share to TwitterShare to FacebookShare to Pinterest
Labels: camping